This project took months – mostly because I’ve been so busy. But finally, she is here, the “Firefly” Big Dummy: 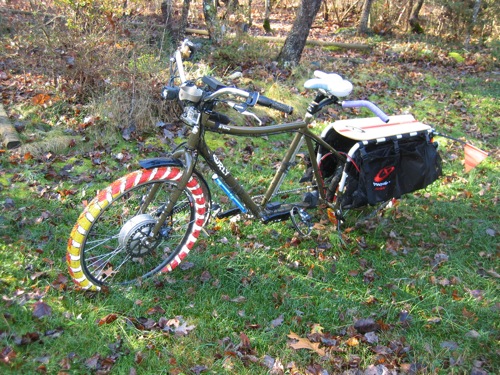 Here are the impressions:
I might seem biased, because we sell this stuff. On the other hand, we also sell Xtracycles, and the Yuba Mundo, along with various other bikes. So I really have no motivation to be biased towards one option over the other.

That said, the Big Dummy is a smoooth machine. It rocks. I must admit, when I first heard people raving about it, my natural contrarian tendencies had me thinking it was just a bunch of hype. Well, it is not all hype. It is real.

I rode an Xtracycle/Stumpjumper combo for years, and for several months now, have been riding a Yuba Mundo. Both were great bikes. They did the job, and they did it admirably. But it is like comparing a Toyota tercel to a Lexus. Or maybe I should think of a better analogy than cars (since we’re trying to encourage people to bike more!). In any case, the handling is better than either the Xtracycle or the Yuba. The loaded stability is similar to the Yuba, but better than the Xtracycle. But more than anything, it just feels like it glides over stuff.

Part of that may be due to the Nuvinci hub. Shifting is a smooth, continuous motion. There are no specific “gears”. This is particularly fun when combined with the eZee electric hub. On other bikes, I found that when accelerating from a stop, I’d have to shift through a rapid succession of gears to keep up with the motor. With the Nuvinci, as I accelerate, I can just slowly twist the adjuster knob to keep my cadence matched to bike speed. It is a really incredible experience.

I was riding along a local street the other day, with my daughter on the back. I saw a woman hitchiking, it looked like she was in a big hurry to get somewhere. I stopped and asked whether she needed a ride. At first, she was incredulous, but, she quickly realized that it would be faster than walking/running, so she hopped on. She was totally wowed by the whole experience. Maybe a future longtail convert? I hope so! Or at least, maybe she’ll tell some friends about it. And the cool thing is, with her, my daughter, all our stuff, and me, the bike still handled well.

Anyway, I no longer think it is hype when I see people write that the Big Dummy is the pinnacle of bikes. Certainly, there are other bikes that are better at some things – racing bikes that are much faster, cross bikes that are more nimble, and etc. But if I were to own only one bike, this would be it.

The gear range on the Nuvinci is better than I expected. I used a 32T front/ 16T rear, the maximal ratio “allowed” by Nuvinci guidelines (though I’ve heard it can probably be exceeded, with a loss of efficiency in the hub). This 2:1 ratio is enough to get the bike up a pretty steep hill with a moderate load, though if I kick in power from the hub motor, then it is no problem at all. But, to my surprise, at the other end, I can pedal it up to about 25 mph in “overdrive”. This was a pleasant surprise, as I had expected only ~20mph from the ratios.

As I’ve written elsewhere, the eZee hub motor is a great pairing for a cargo bike (as is the BMC). They are relatively lightweight, but produce good torque for hill climbing, without requiring a humongous battery pack. The operation on the front of the Firefly is pretty seamless. I thought I’d notice the weight, but on this setup, it is barely noticeable.

The bike moves through corners gracefully for a longtail. The SweetSkinz cruiser-width tires (2.1″) seem to roll pretty well, I’d say at least as well as the Conti Town & Country, and close to the Scwhalbe Marathon.

Ok, enough raving about it. Some more pictures, then a few notes about the Nuvinci install at the bottom. 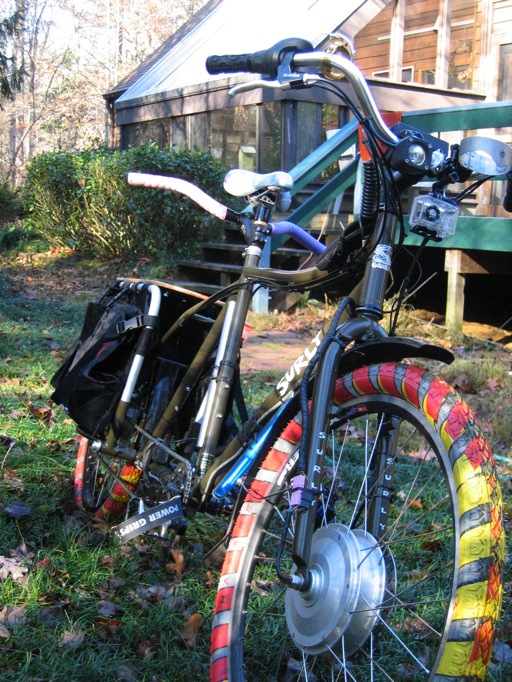 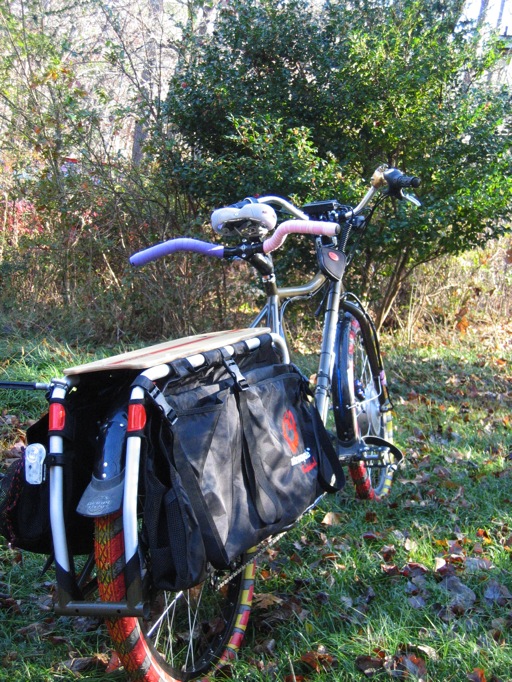 Shot of the cool NuVinci shifter pod, and my crane bell (not a hint of plastic on this bell, the sound is puuure): 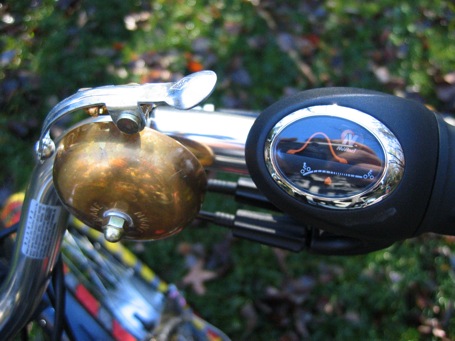 Ok, some notes about the build. The biggest issue is that the Big Dummy has vertical dropouts, but the NuVinci is mostly designed for horizontal dropouts. However, they’ve now included a little torque arm and a no-turn washer that work with vertical dropouts. But it still requires a chain tensioner to work (and besides, I want to run a dual front chainring at some point). I’d read various rumors of incompatibility between chain tensioners and the “shifter pod” for the Nuvinci, pictured here: 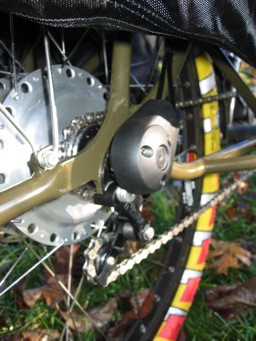 This pod converts the cable tension into a rotational force, to rotate a shaft that changes gear ratio. It was clearly not designed with the thought that one might need to run it with a chain tensioner. I contacted Fallbrook (makers of Nuvinci) about this, and despite rumors that they are coming out with a compatible chain tensioner, the rep I spoke to did not know of that, and pretty much told me to Google search. Well, I gave up on that after finding little clear information, and just decided to order a Paul Melvin chain tensioner, and to “make” it work.

After getting the hub installed, and running the two cables (yes, it requires running two cable housings and cables for the gear changer to work), I quickly discovered the problem. That little plastic pod has to lock down onto a little disc underneath it, or it will just fall off. But the chain tensioner is in the way of it doing so. One solution I saw to this is just zip tying the thing on. Not my favorite solution. So I approached it a different way 🙂 I got out the diagonal cutters, and started snipping away plastic on the pod, until there was clearance for the tensioner. Here is a picture of the cutaway: 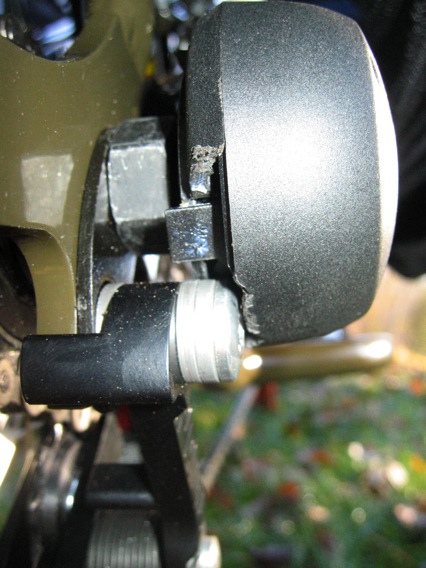 It was a fair bit of cutting that had to be done, but fortunately, I was able to do it without obviously ruining the structural integrity of the pod. I hope that in a future version of the hub, they redesign the pod to avoid this. But all in all, it would be a quick and easy procedure to repeat.

However, not long after I did this, I ran across the Kore Chain Reactor, which uses a chainstay mount. That might actually work without any hacking at the shifter pod.

The wheel build on the Nuvinci was very much like building up an electric hub motor. It has to be done in a 2-cross or 1-cross spoke pattern, since a higher cross pattern results in too much spoke flex at the nipples. We used 2 cross, on a Sun Mammoth rim, and DH13 spokes, to produce an incredibly beefy wheel. (We can build these on request, just contact us).

I was able to locate the motor controller in a mostly out-of-sight location, underneath the chainstay tube (is there a better name for this on the Big Dummy?). I like that it hides most of the wiring, but it is also somewhat vulnerable there if I decide to do some curb hopping. The jury is out on this. 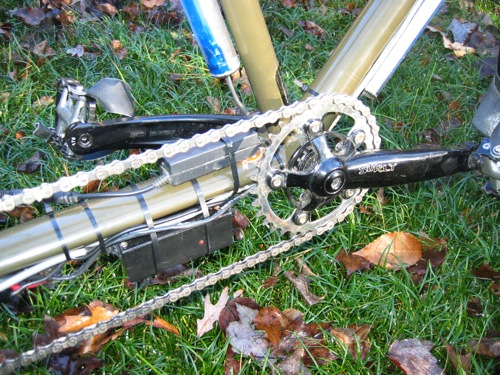 Not much else to say…. it built up well, and rides well.

×
We use cookies to ensure that we give you the best experience on our website. If you continue to use this site we will assume that you are happy with it.OkNo