Recently there was a lively discussion over on the Rootsradicals mailing list about energy usage and electric bikes. There was debate about whether it takes more energy to run a bike by electric power or leg power. While the debate was all well and good, it sidesteps the bigger picture. Biking in any form, whether by leg power, electric power, or both, is a far more energy efficient endeavor than driving a car. Depending on how it is calculated, riding a bike is equal to getting anywhere from 200 miles per gallon up to over 1,000 MPG. Even the greenest of electric cars aren’t going to approach those numbers anytime soon.

But there is a tradeoff using a bike: time versus energy. The reason bikes take so little energy is because they move slowly. They don’t suffer big losses to friction (plus, they are lightweight). But riding a bike takes more time – at least to go long distances (for short intra-city trips, biking can actually be faster).

I started thinking about this tradeoff by monitoring the energy usage on my electric bike. I noticed that when I was in a hurry, I would consume almost twice as much power than when I was taking it easy and going more slowly. Now I’ve made it into kind of a game, to try to keep my energy usage down, I am also forcing myself to slow down and enjoy the ride more.

But this tradeoff is not just present in biking. It is present in nearly everything we do in “modern” society. Here are some examples:

2. Washing clothes and dishes – it is both faster and more energy intensive to use the washer/dryer than to do it by hand.

3. Food – it is more energy intensive to buy cheap but fast food, than to grow and cook one’s own

US society is one of extremes. On the one end we have people who jetset around in a constant aggravated rush of business. On the other extreme there are the Amish, who exemplify slow and low energy lifestyles.

And then there are all the rest of us in the middle. The question is, how much should we trade down our energy use, at the cost of spending more time on our daily activities?

I think the key is reframing that question. I linked to this article before, but I’ll link to it again because it is great – it is all about a mom who formerly led the go-go rushed life, and then due to high gas prices, was forced to slow down while becoming a bit less energy intense.

She discovered that there is increased joy in slowing down. Joy in walking the kids to school, or biking to the grocery store. Many people enjoy gardening, but think it takes “too much time”.

Maybe many of us have been convinced that we need to keep moving faster and faster to “keep up with the Joneses”. But maybe the higher cost of energy will force us all to slow down (except the super rich). And maybe, seeing our neighbors, friends, and co-workers slow down, we won’t feel so guilty about it. About taking time for ourselves, for our families, for some hobbies. Some people have already done this. I have no statistics to back this up, but I believe there is a strong grassroots movement of people doing exactly this. People who are fed up with the go-go buy-buy pace of modern life, who have slowed down, dropped out, semi-retired. Those people did it by choice. Maybe the rest of us will be forced to follow, whether we like it or not, by high energy prices.

But I don’t want to make it sound like slowing down is just drudgery. I look forward to my daily bike ride to and from work. It is a time of great enjoyment for me (except on the rare occasion I encounter an intentionally obnoxious driver). I get to look around, see the world, breath the air, hear the birds. I get exercise. I listen to music (not earphones – I have a small stereo on my handlebars). Nowadays, when I get in the car for trips around town, I actually get stressed out, whereas the bike is relaxing, just getting into the rythm of the pedals.

It is hard, though, straddling between wanting to conserve energy and wanting to keep up with all the self-imposed time pressures. Recently, after being aghast at our electric bills (definitely NOT from charging the bikes, that is only $0.03-$0.05 per charge), we realized that the dishwasher was consuming a lot of energy. So we started washing dishes by hand (with water heated by solar). This greatly reduces energy consumption. But it also takes more time. Sometimes it is actually enjoyable – just zoning out, focusing on the present moment, and even listening to music. But other times it is just stressful – because it seems like there are many other things that need to get done.

So how to find the balance? Until it is forced on us by high gas costs, I think the key is one step at a time, avoiding extremes. To me, it is all about doing the little things that are both doable and enjoyable. I’m not about to quit working just so I can farm all my own food. But at the same time, riding the bike every day, hanging the clothes out to dry, and little things like that take some time, but also save a lot of energy.

If everyone did it, there would be a huge impact on energy use and carbon dioxide production.

It is a starting point.

My daughter on the way home from dance recital on the Xtracycle: 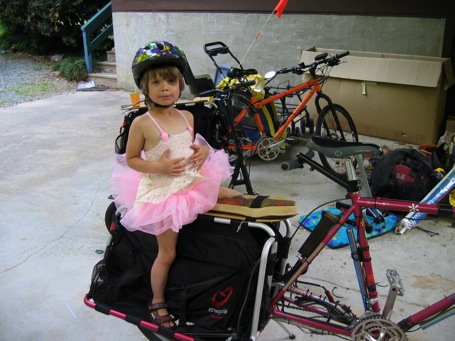