They’re the buzz word of the bike industry lately. Will 2010 be their year? or will they burn quickly as a fad and fade out as in the past? As a rider and dealer of electric bikes, I’ve watched the offerings grow from small, obscure companies, to today with a plethora of options, including major bike manufacturers jumping on the wagon. I have to say I’m pretty impressed by the offerings. Clearly the industry thinks these are going to be big and small and large companies alike are gambling big bucks on developing products and getting dealers to support them. Will they hit it big? I don’t know, but here are a few of my thoughts on the question. 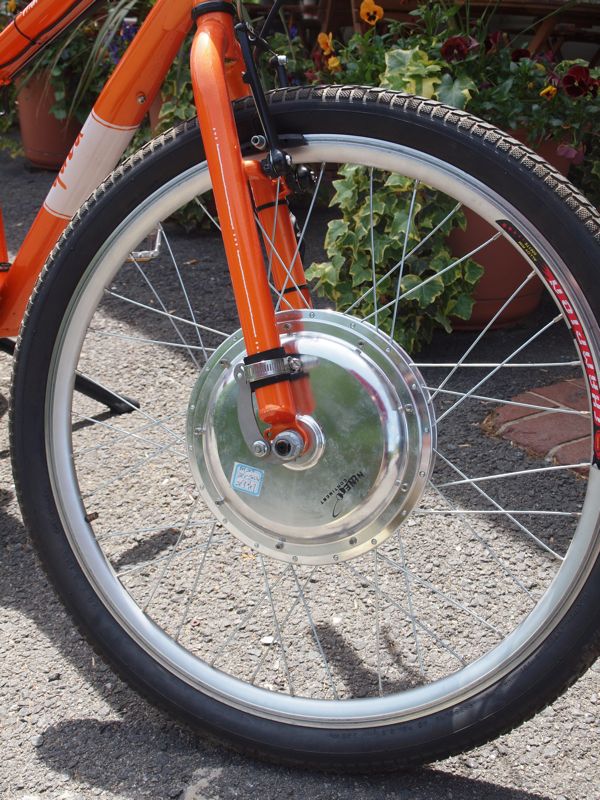 I’ve been interested in electric bikes for many years. My first bike was a ZAP bike in the early 1990s that I shared with my significant other. It employed a roller that went against your tire to help propel you forward, and I used it to assist me on my 12 mile each-way commute across town. The roller system worked ok as long as the road was dry, and you stopped occasionally to adjust the pressure on the tire. The battery was a golf cart battery strapped to the rear rack, and if I spared it’s use to the hills only, it would last all the way to work and half way home before giving up the ghost. But it did provide just enough help for me conquer my commute, a large factor being the few extra minutes it saved me.
By contrast, today’s ebikes are so much better, they barely compare. With my current electric kit, I can easily ride 20 miles or more, keeping my speed at 15-20mph over hills, even with cargo! The kit works reliably rain or shine, and the battery is 3 times the capacity for the same size and weight as my original ZAP kit. But most importantly, the kit has allowed me to free myself from my car, addressing my concerns about peak oil, environmental degradation, and quality of life for me, my kids, and my community.

As bike commuters, we generally understand the benefits of biking versus driving. We know that biking is healthy for us. We know that driving uses lots of resources. We know that our resources are finite and our environment is being polluted. But when I really started looking into the numbers, I was shocked. You see, through a friend I learned about the problem of Peak Oil. Peak Oil is the concept that at some point the world will have reached the peak efficiency of oil extraction worldwide. That means that all the easily extracted oil will be used up, and the stuff that’s left will be more difficult, costly, and time consuming to extract. Many geologists argue persuasively that peak oil is at hand, but that we don’t realize it in the marketplace yet. And the recent disaster in the Gulf of Mexico just underscores that drilling for oil is risky and has lots of associated costs. 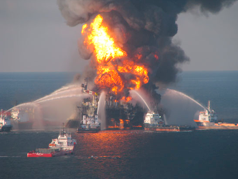 Once you dive into the consequences of a future of more expensive and declining supply of oil, all kinds of scary facts start popping out – oil is required for the production of plastics which are critical in the health care industry. It’s heavily embedded in the production and transport of our food supply. It’s used in the pharmecudical industry, and will be required to manufacture and deploy solar panels, wind turbines, busses, bicycles and all the other elements of an alternative energy future.
Yet, here we are, burning up oil by driving around. Over 60% of the US oil supply goes to transportation, much of it personal and short distance. The internal combustion engine uses only 20% of the energy contained in gasoline while the rest is wasted in inefficiencies. And most of the energy consumed in driving is to propel the car – a big, heavy, metal box – not us or our stuff.
Clearly, we need to change our paradigm about transportation if we’re going to have an effect on this problem. And the sooner we can do that, the better off all of us will be. Once I realized this, I thought the best place to start would be with myself. I’ve always been a casual biker, recreationally and for transportation. But I had a problem if I was going to ride my bike more, and it came in the shape of 3 small people.

You see, I had 3 small people under the age of 5 to take care of and not only did they need to be transported, but I needed to have the energy to deal with them. After a lengthy internet search, a cargo bike was selected to transport them. But I didn’t live super close to town, and there were some big hills in the way. I didn’t think I could do it. I could barely pedal the bike up the 1st hill out of the driveway. This is where the electric assist kit transformed this into a realistic solution.
With my kit, I can pedal the bike even with 3 kids or a week’s worth of groceries, over 12 miles of hilly terrain. I can do it every day and it doesn’t take forever or leave me sweaty and exhausted. It’s become a realistic and competitive alternative to the car. And in fact, it’s become the preferred option most of the time as everyone enjoys riding the bike more than riding the car, especially Mom! 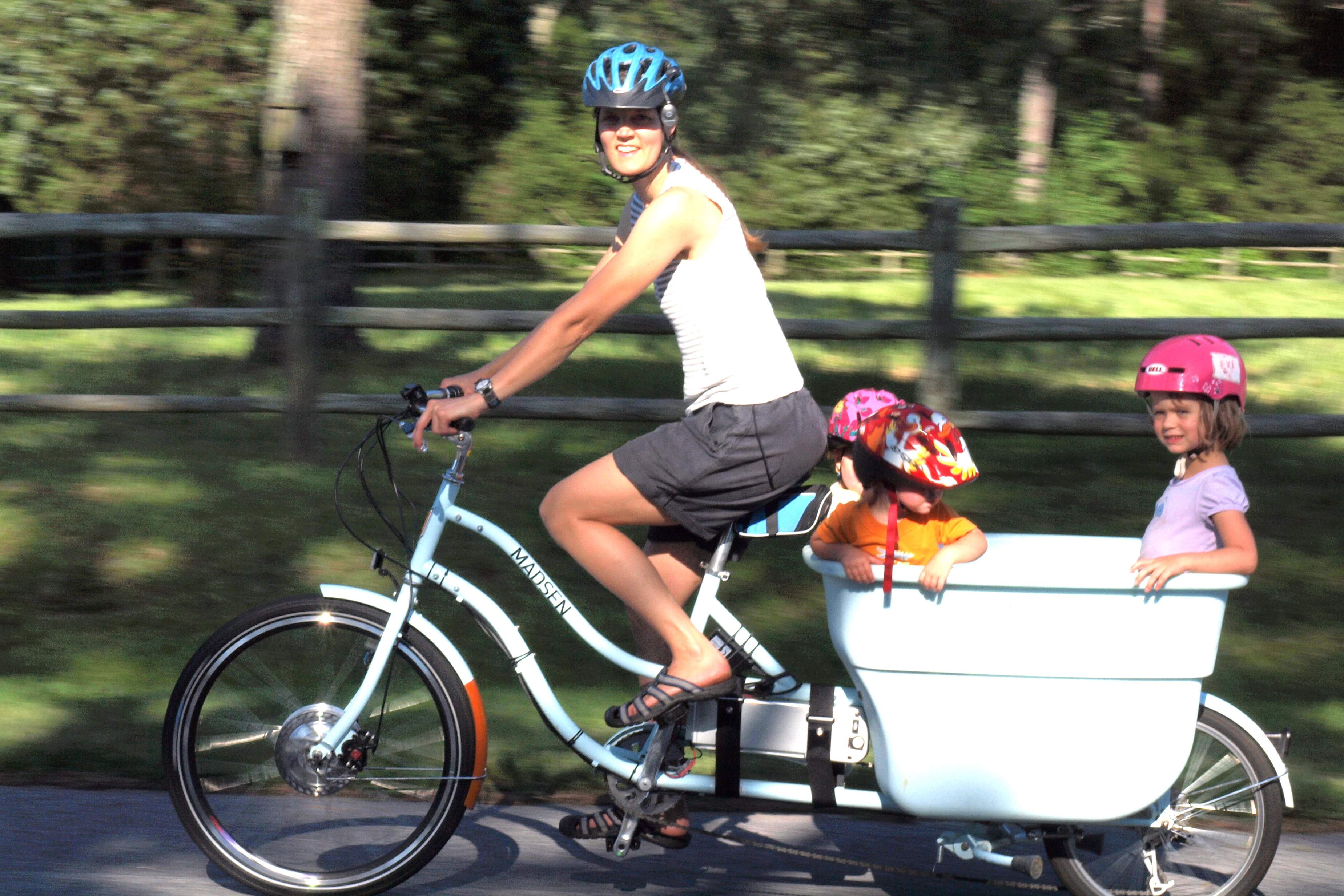 Setting up this bike actually was a life changing experience for me, so I started a bike shop to help other people realize their own dreams of using their car less and their bikes more. Electric assist has been a big part of this. We help a lot of people like myself who want to electrify cargo bikes. But we also help a lot of commuters with distances of over 3 miles to go. Some people are even riding 20 miles each way, and the electric assist just makes this commute much faster and more do-able. Instead of bike commuting one day a week, they’re doing it 3 or 5 days. We’ve also helped people with disabilities, people who are out of shape, and people who just want to have more fun riding their bikes. It’s been a pleasure watching all of these people dust off bikes and leave their cars in the garage. In my book, anything that enables people to do that is worth doing.
Would it be “better” if these people were able to bike under their own power without the assist? Maybe. But consider again this fact. The energy used by a typical electric bike is about 15 watt-hours (wh) per mile. The energy used by a typical car is 1,580 wh per mile. That means that you can ride your electric bike for 20 miles and use less energy than it would take to drive your car 0.25 mile. That’s a pretty startling statistic.

The adoption of electric bikes

Over the past 20 years, electric bike technology has made huge strides to where it is generally reliable and easy to use. This is not to say that everything out there is quality – there are still a lot of low quality and low powered bikes out there. But companies manufacturing the bikes and kits have started paying attention to what consumers want and I think we’ll see considerable weeding out of the stuff that is not worth it.
One of the biggest barriers to electric bikes in the marketplace that I see today is actually the reluctance of independent bike shops to take them on. Your local bike shop employees are probably dominated by hard core bike enthusiasts who wouldn’t consider an electric bike for themselves, and so are not very interested in selling them. I’ve also seen considerable reluctance on the part of mechanical staff to be interested or even willing to work on electric bikes, simply because it’s something pretty different than what they’ve seen before. The door has been left open for new specialty shops focused on electric bikes to pop up, and also for big-box retailers to get into the market. These retailers, in combination with the internet, have served to grow the market considerably. As the products increase in quality (and thus decrease in maintenance and support), and as consumer demand grows, I think local bike shops will come around. This would be a great thing, because local shops will always be the best place to get the service and support that bikes of all types need.
So, will electric bikes become a big part of the bike industry? My answer is, I sure hope so.  The potential they have to encourage and enable people to ride more is huge. Both hard core riders who commute longer distances or are aiming for the car-free lifestyle, and for casual riders who would ride more if it was easier and more convenient. And riding bikes is good for our souls, our communities, and our planet.

This article originally appeared on CommuteByBike on June 2, 2010