Loading...
Skip
So I’m in China.  Bicycles are everywhere here, still a lot of people use them for transportation.  Last night I saw a guy riding his bike with 3 mattresses on his back!  It was an amazing balancing act, and a testament to the determinedness of the people.

But car use is on the rise.  Here there are many car ads, and cars are seen as a wealth and status symbol – a sign of the good life.

Every society seems to go through an evolution with cars – in the first phase with cars being a luxury item only for the rich, in the second phase cars being something the middle class aspires to have to show wealth and status, in the third phase, society reaching saturation where the number of cars is so large that it puts strains on the system, causing health problems, air pollution, and traffic congestion. There also appears to be a fourth stage, where countries realize the detrimental aspects of cars, and work to reduce their usage, replacing them with age old solutions like bikes, public transport, and walking.  My perception is that China is still in stage 2 – the broad middle class acquiring cars as part of the rapid growth of wealth here.  But already traffic problems are great – and so are pollution problems.  In Bejing, it is gridlock during rush hour – and that with only 1 in 3 people owning cars.  Also, there is an almost constant a haze over the city, which during my stay, only broke after some heavy rain. 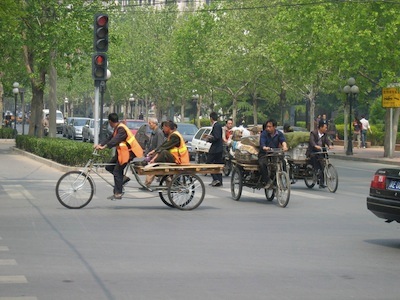 When I was in the city of Shenzhen, I inquired with several locals about bicycle rental.  I love to see new cities by bicycle, because I can see more on bike than on foot, yet it is still much more intimate than in a car.  It is also good exercise, to offset the extra eating I tend to do when visiting new places.  However, when I inquired with one of the young students, she said, “Why would you want to bike?  Shenzhen is a modern city!” The implication was that in a “modern city” nobody would bike.  She seemed dumfounded that anyone would prefer to ride a bike, especially a “rich westerner”. She viewed bikes as a contrivance only for the poor.
Ultimately, countries like China will continue the evolution to more and more cars, until the problems start becoming so apparent that there is a push to go back to other modes of transportation for the masses.  If oil prices continue to rise, this may happen sooner rather than later.