“It was clear to me that the wolf was going to catch me, and I began fumbling for the bear repellent in my handlebar bag, riding as hard as I could all the while so as to buy some time..”

The above quote was from just the first week of a 3.5 year adventure by 3 men. They rode from the top of Alaska to the tip of South America, all by bike.

It’s the story of Riding The Spine, and it’s an incredible one.

Now you’ll have a chance to hear it for yourself (and so will I!), as I get to interview one of these 3 men on a FREE, live call-in tele-seminar. I feel very lucky to get to hear this one first hand. Here’s how they summarize the trip on their website:

“Instead of riding along the PanAmerican Highway, their unique journey brought them along the dusty, muddy and difficult dirt roads and trails that criss-cross the continental divide – the longest contiguous mountain range in the world; hence their name: Riding the Spine.”

“Living off as little money as possible and seeking adventure along the way, they cooked their own food, wild camped most every night, and found themselves looking back on some truly epic moments: being chased by a wolf in Alaska, riding for months in snow/subzero temperatures, getting held at gunpoint by the military during a drug bust in the Copper Canyon” (just to name a few!)

These guys pedaled Big Dummy cargo bikes with all of their gear, food, and everything they needed to live. It’s a testament to the bike, the men, and the sheer force of adventure.

I’ll be talking with Goat, a lifelong adventurer who also seems to have a penchant for minimal footwear, as there are many photos of him riding in flip-flops or bare feet. I once saw a guy mountain biking outside of Moab, Utah wearing Birkenstocks and was floored (maybe it was Goat?). At the time he passed me, I think I was walking my bike down some knarly rocky section…

Anyway, here’s Goat (his real name!) at the top of a Volacno in central america. 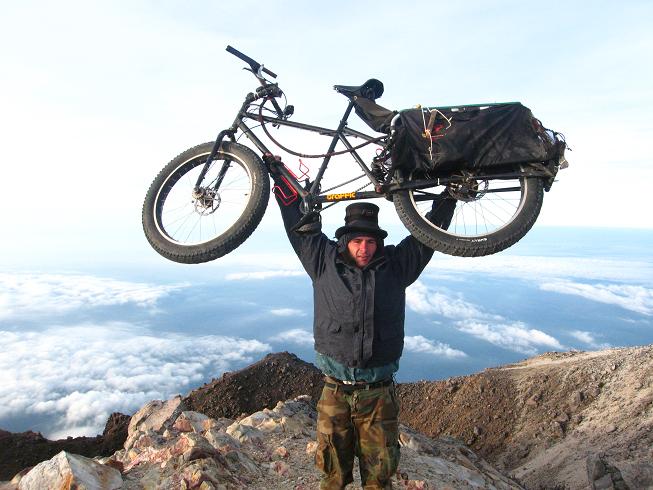 At the top of Tajumulco Volcano

“Our trip has been about making a lifestyle out of something you love. It has been about taking that tiny dirt road you may pass by everyday and wonder where it goes. Sometimes it is about ridding yourself of a routine, and discovering where chance may take you – into the lives of new friends and hospitality or into dangerous and challenging circumstances. And yet, every time I think I grasp the purpose of our journey, as if it materializes in the reflection of still water, when I reach down to grab ahold, the object suddenly vanishes..” — Jacob of Riding the Spine

You don’t want to miss this incredible interview! I can’t wait to hear about their wild adventures as well as more mundane questions like what did they eat and how did they handle bike breakdowns in the middle of nowhere? For a really “Out There” story, tune in. I hope you do – it should be entertaining!

Listen in for stories such as:

This interview will be Tuesday, December 7 at 9pm Eastern. Can’t make that time? Registrants will have limited time access to audio replay.