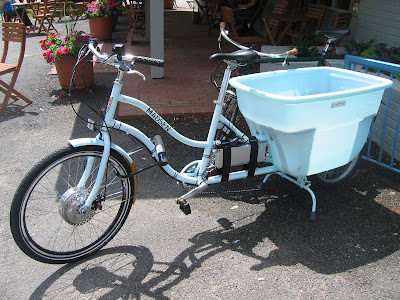 Family life around our house has entered a new era with our newly electrified Madsen cargo bike! With 3 kids under 6 we’ve been searching for the solution to transport them, and the Madsen with it’s bench seats and social atmosphere is the new favorite. Only problem, house to town is a good 5-7 miles with hills up and down, and some days the old legs just aren’t up for that (see previous post ). 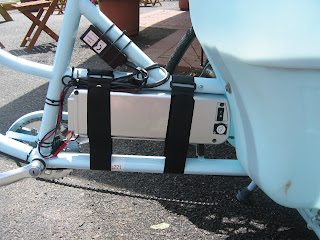 But the solution to this problem came with the installation of an eZee electric motor kit. The motor wheel replaces the 26″ front wheel, and controller and battery conveniently mount in the frame between the downtube and the bucket. A little creative engineering with some velcro straps and zipties and the lithium battery was mounted. The battery weight is suspended from the upper frame tube and the straps wrap around the lower tube to keep it from swinging. The little piece that keeps the super long Madsen chain aligned also doubles to keep the chain and battery separated. The eZee battery itself is in a nice plastic case with a switch, so is protected from the elements somewhat. Removal of the battery for charging involves undoing the straps, but once I got this system down, that became pretty trivial. I like the way the battery is low on the bike and not too obtrusive or taking up any of my bucket space. The wiring is also all conveniently kept together. 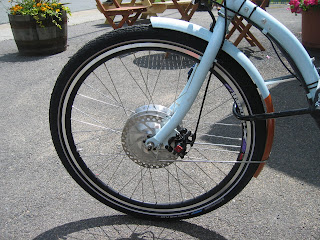 Mounting the motor wheel in the front fork was not too difficult until we got to setting up the disc brake. The eZee kit is disc brake compatible and comes with a rotor, however, the brake that is supplied with the Madsen was not compatible with the wider hub. No problem, a new brake (Avid BB7) was ordered up and installed. The 180mm rotor that came with the eZee kit paired with the new brake and only a few additional spacer washers were needed. Once the brake issues were worked out, it was just a matter of making sure the bolts were properly tightened. A tire change wasn’t even necessary because the kit comes with the Schwalbe Marathon Plus tire already installed (and puncture resistance is a good thing on these motor wheels!)

The eZee kit operates with a handlebar mounted throttle. This replaces the right grip, and since the Madsen has trigger shifters there were no compatibility issues there. An LED battery gage also goes on the handlebar to keep track of battery useage.
Once the kit was on the bike, we
flipped the switch on the battery and that baby came to life! The ride home was a breeze as those hills melted away under steady pedaling and electric assistance.
Last weekend, we tried out the new electric Madsen with not one, but TWO trips into town with everyone. First on Saturday morning, everyone loaded up for a trip to the Farmers Market, where we loaded up on greens, strawberries, and yummy treats from our awesome local growers. Then after a break at home for naptime and lunch, it was back downtown again for a kids festival put on by the local La Leche group. Music, hula hooping, and fire truck tours later, we took shelter at the shop from a sudden afternoon downpour, and then picked up tacos at the mobile taco truck on the way home. Kiddos were all tired and one even lay down for a nap on the way home! Overall a great day, no cars involved, and it wouldn’t have been very possible without electric asisst. I think the new Madsen is going to be seeing some light in the weeks to come.
-Elise