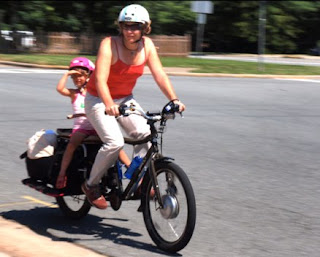 It’s been a while since I posted to the Cycle 9 blog. The hiatus was in part due to a lot of grant writing that I had to do for my day job. There’s this thing called the “stimulus” that congress passed, and they are trying to stimulate scientific research. And so government agencies like the National Institutes of Health are accepting grant proposals to spend the stimulus money. Well, since I work at a major research university (the University of North Carolina at Chapel Hill), I was obliged to write some grant proposals. With all the grant writing, the blog was left a bit lonely.

But in the background, a lot has been going on at Cycle 9, in terms of bike stuff. Let’s see what I can dig up from the recesses of my memory: 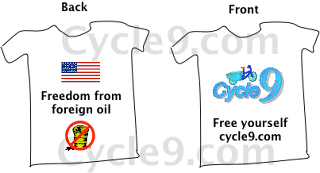 This t-shirt points out that it is patriotic to ride your bike and free our country from foreign oil. Maybe it will help some drivers who “don’t get it” to start figuring it out. We hope to have this shirt ready in August. Drop us a line if you want one. They’ll be printed right here in North Carolina using organic cotton and chemical free dyes.
Happy 4th, I hope everyone had a great celebration of our country’s independence – and I hope we have many more to come.