You may have heard of an electric bike before and asked yourself, “what the heck?”

I must admit, it sounds like an odd contraption, adding an electric motor to a bike.

If you are like most people, when you first heard of it, you may have had a reaction of “I don’t need that, I wouldn’t get exercise.”  Or “it would be cheating.”  Or “people would think I’m wimping out.”

I had a reaction like that the first time I heard about them, way back in the early 90’s.  But then the idea wouldn’t leave my mind.  I eventually called up to order one, because I thought it would be nice to have a bit of extra help in my every day commute.  Plus I like trying bleeding edge contraptions.

And I was most surprised by one thing: how fun it was.  Once I was on the bike cruising around with a human-electric hybrid, I quickly lost the notion that it was an odd contraption.  I really liked it.

The thing I realized is that it was so fun that it encouraged me to bike more often.  I started biking lots of places instead of driving, because the bike had become so much more fun.  Especially in the hills.

Many people who come in the shop have the same reaction as my first one (and perhaps yours): what the heck?

But for those that overcome the reaction and try one out, they almost always come back from their first e-bike ride with a big smile on the face.  It is a transformational experience.

I don’t know what it is.  It is more than a decade later, and I still have trouble explaining why it is so fun.  It just is.

Maybe it is because I can readily cruise up the hills, even if I’m tired or it is hot outside.

Like you may have, sometimes I’ve wondered whether I get enough exercise.  But I can spend months only riding the electric bike (no gym, no other exercise to speak of), then get on my road bike and ride very fast.  I seem to stay in good shape.

I know a lady who bought an e-bike kit to put on her bike, and enjoyed it so much that she rode every day, loosing 80 lbs.  She must have been getting some exercise.

It seems to encourage me and many others to ride their bikes so much more, that we get a lot more exercise than we would otherwise.

When you buy a car, do you look for the most spartan, uncomfortable car possible?  Or do you go for a car that will transport you around with plenty of power and in comfort?  If you are like me, you prefer having a bit of power and comfort.

But people are funny.  When it comes to buying bikes, I encounter many people who think they should buy a bike that forces them to work hard all the time.  Maybe that’s why a lot of those bikes sit in the garage unused.  If you have to work hard every time you get on the bike, you might not be so inclined to use it.

But if it is always fun to use, you might be more likely to use it.

That’s why I think electric bikes are great.

If you are someone who goes out and rides 50+ miles on your bike on the weekends for fun, you don’t need an electric bike.  But if you think that 10 miles is a long distance to go on a bike, then you may be the perfect candidate for an electric bike or hub motor kit.

Electric bikes are made from the start to incorporate the electric features.  The main difference from a regular bike is that they usually have a spot for a built-in, lockable battery, like on this bike: 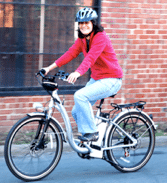 That’s the battery behind and under the seat.  Looking at this bike, you might not have even realized that it was electric.

You can control the power with a throttle on the handlebar.  If you just want to pedal, you can leave the throttle in the off position.  If you want full power, you just twist the throttle all the way.  If you want just a bit of power, you twist it a bit.  You can use any combination of pedaling and/or motor power that you want.

Electric hub motor kits are meant to be added onto your own bike.  They come in front wheel and rear wheel versions.  They are great if you already have a bike that you like, but want it to be electric.  The work just like a regular electric bike after installation, with the same kind of throttle activation.  You can still ride it just like your bike, or you can turbocharge your ride using the throttle.

With either the electric bike or the e-bike kit, when you get to your home or office, you just plug in the battery for a charge.  It only costs 1 to 2 cents to charge up, and usually takes about 3-4 hours.

Most of these can go around 20 miles per charge, though if you like to pedal a lot, you’ll probably get more than that.  If you’re really not into the pedaling thing all that much, then you might get just 17-20 miles.  That’s still a pretty good distance.